It has been a trying day.

I think I pretty much have the book-packing under control.  I’m shipping off the books I want to keep box by box (the rest are being sold on Ebay and/or via tag sale); some of my more treasured books (autographed copies, etc.) will be traveling with me.

My next plan of action has been to go through my closet and get serious about sorting out my clothes — what to keep, what to donate, what to throw away.  Of the clothes I am keeping, I wanted to also sort out the bare minimum of what I want to keep here, and what I will be shipping out west.

One of the things I needed to do before I could move forward with the clothing-phase is to obtain some plastic storage bins with lids.  I had been asking around on Craigslist, Facebook forums, etc. to see if anyone had any they’d be willing to donate or sell to me for cheap.  But, alas, no offers.  My packing deadline is drawing near and I can’t really afford to wait around anymore so I decided to just bite the bullet and buy some.  I have been successful at selling a handful of books via Ebay, so at least I’ve been able to cover some of my moving costs that way.

I had to go out to the post office to mail some of my Ebay sales anyway, so I decided to make a trip to the store to pick up some plastic bins.  I invited my BFF/roommate to go with me; she’s been having a rough time herself lately, and I figured misery loves company.  It’s Monday, it’s rainy and cold, we both feel like shit… Let’s do this.

I wasn’t sure where to look to find the cheapest bins.  I’ve been shopping around online for prices, and… damn, since when did plastic bins get so fucking expensive?!  BFF suggested that I try… Wal-Mart.  FUCK.

I am pretty much morally opposed to shopping at Wal-Mart, but in times of war, extreme stress, and desperation, people tend to temporarily put aside their morals and do whatever they need to do to get by.  The truth is, Wal-Mart had the best prices I could find, and I have less than 200 bucks to my name right now.  So, off to Wal-Mart we went.

I bought five bins, including one extra-large one.  An unexpected challenge was fitting it into her car — a Toyota Celica.  Unfortunately, she had some other stuff stored in the back of her car, so it was a challenge to find room for the bins. We had to wriggle & wrestle them into the hatchback… in the goddamn pouring rain.  We had to use a bungee cord to hold the hatchback closed because it wouldn’t shut all the way.  Oh well, at least we made it home alive.

The real challenge for me began when I got home and resumed packing.  Sorting through all of those clothes was an emotional ordeal.  I’m aiming to only take what I really, really want and/or need to take, which means that when all is said and done, I’ll only be keeping about a quarter, perhaps less, of what I had.  A lot of the clothes I’m getting rid of are things I haven’t worn in years, and in all likelihood wouldn’t wear again.  Some of them are so old and worn that I threw them away.  Most have been shoved into plastic garbage bags, to be donated to thrift stores later.

And for the most part, I won’t miss them, but there are a few items that I find difficult to part with for sentimental reasons.

That long-sleeved green shirt that I once loved?  It’s old and worn and getting little holes in it, and it’s neck is stretched out.  It’s not even worth donating, so… into the trash it goes.

That shirt I wore to my brother’s wedding?  Well, it was a really good memory, but.. I doubt I’ll ever wear it again, so into the donation bag it goes.  I can’t justify keeping it; it will only take up more room.

The striped t-shirt I wore that day I took Luna to the vet for the last time, not knowing at the time that I’d never see her again?  Yeah, I’ll never wear that shirt again, ever.  Into the donation bag. 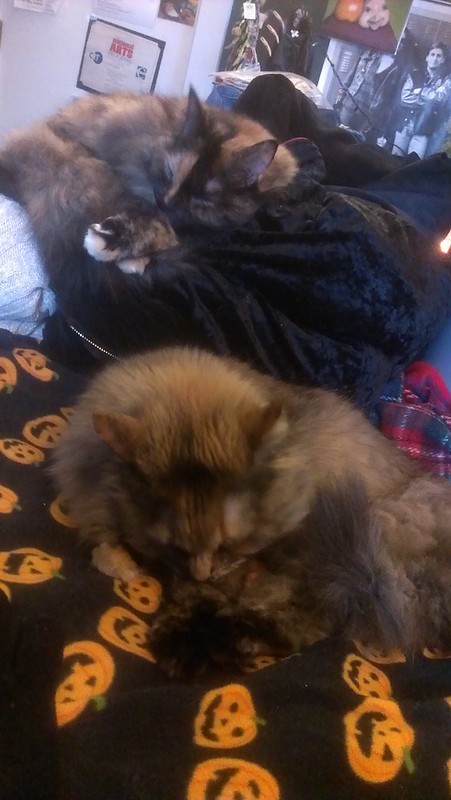 Sigh.  Now that I’ve pretty much weeded through all my clothes, I’m going to start packing those to ship, too.  Most of the clothes I’m keeping (and some various other non-breakable items) will most likely be shipped via Amtrak rather than through the post, however.  In the long run, it should be cheaper.  A few things will be traveling with me, and those will be packed into one of the bins. 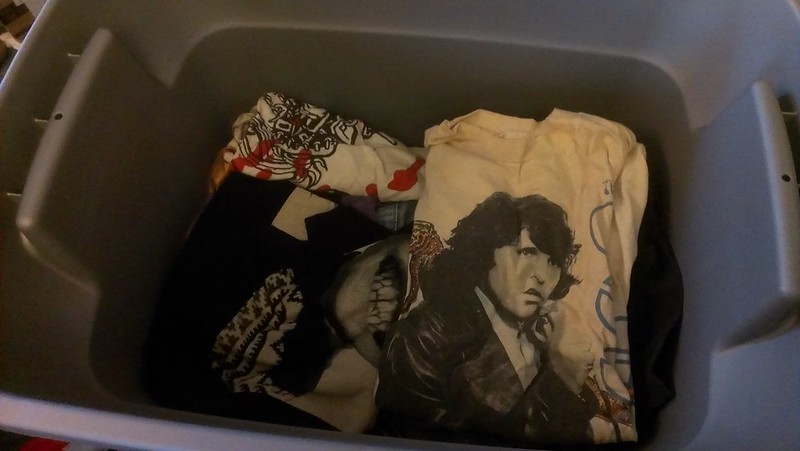 Now at the end of the day, I am closer to being ready to move, but completely emotionally drained.  I keep telling myself that it’ll all be worth it, that it will be a fresh start and that I won’t miss all of the stuff I’m leaving behind.