Around the Second Life blogosphere, there is a meme challenge going around, & sometimes I think those are fun to do, ANNNND I am an introspective person by nature, SO I thought I would participate.

Share a side by side comparison of your first blog picture beside a recent picture of your avatar. Don’t forget to share the link to your image in the comments and add your pictures to the Blog Memes flickr group.

I believe this meme idea was given to me by Ms. Trixie Cliassi last year. The idea was to share a comparison of your first blog post to your most recent or new one. I’ve just taken a new snapshot similar to the old one of what my avatar looks like today. She also asked us to share our thoughts on how we feel we’ve improved as photographers or bloggers.

For my version of this challenge, I will instead focus on my past decade as an artist working in the metaverse.

My first Second Life-related blog was hosted on Deadjournal, and this is the first entry — the chronicle of my first art show in cyberspace, ever.  Back in ’05, the art scene in Second Life was pretty much non-existent.  It probably wasn’t until 2006 or so that art spaces started to really establish themselves.  When I started, I was like many current Second Life artists who merely upload their 2-dimensional work and apply it to flat prims in a traditional gallery setting.  But even then, when I was only a couple of months into SL and only a novice builder, I experimented with more dynamic ways of envisioning what art could mean in a virtual world.  In my first show, I included rotating objects & light —  back then, there was only the OLD, old lighting model (before hardware lighting, before the current advanced lighting model):

Unfortunately, that lighting got to be very laggy so it had to be used sparingly. 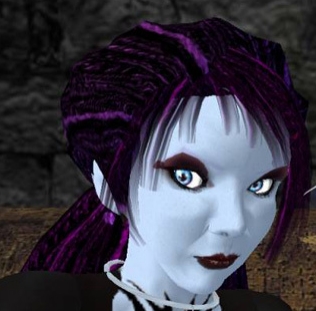 Since then, both the lighting model in SL my art, my avatar, AND my Self have evolved & improved. Immediate reflections & miscellanea on my evolution as an artist & as an avatar, between 2005 & now:

The SLurl to my main artspace, INTERMUNDIA, can be found here. —> Kress/206/85/146
Visitors will also find landmarks to some of my other art on display around the grid.

[*Note: this will be my last week in-world until I can get a new computer, so if you’d like to meet up with me to discuss art, identity, or anything else, please contact me soon.]